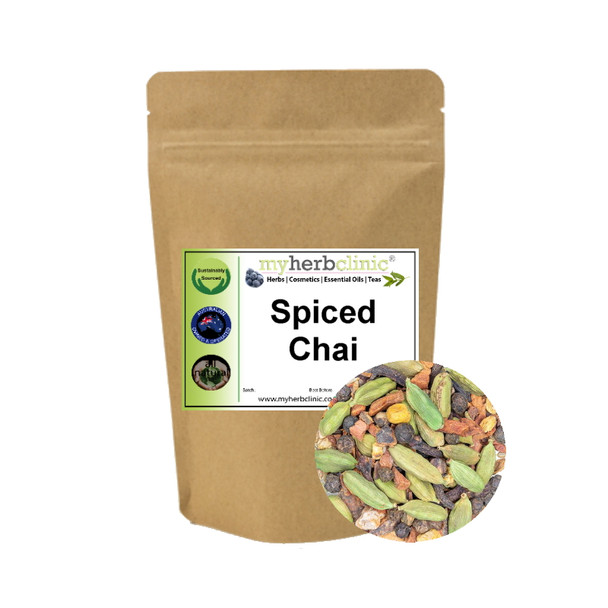 This delicious naturopathically prepared tea is the perfect blend of cloves and spices, this herbal chai is warming and uplifting – with no caffeine!

Cardamom: This has been used in Ayurvedic culture It is full of antioxidants!
Ginger: Widely used as a spice and a folk medicine.
Cloves: Have been used throughout history. Cloves are an excellent source of manganese, a very good source of vitamin K and dietary fiber, and a good source of iron, magnesium, and calcium.
Cinnamon: Cinnamon is a spice obtained from the inner bark of several tree species from the genus Cinnamomum. Cinnamon is used mainly as an aromatic condiment and flavouring additive in a wide variety of cuisines, sweet and savory dishes.
Black Pepper: Ground, dried and cooked peppercorns have been used since antiquity, both for flavour and as a traditional medicine. Black pepper is the world's most traded spice, and is one of the most common spices added to cuisines around the world.
Nutmeg: It doesn't just enhance the aroma and flavour it is full of vitamins and minerals. It can help improve sleep and has the trace minerals, Potassium, Calcium, Iron and Manganese. It has been used for centuries.

For a more traditional chai tea: Place the chai in a saucepan and add desired milk. Bring gently to the boil, and simmer for 10 minutes. You can add honey or sugar to sweeten, if desired. Strain mixture into a cup - Enjoy.

MY HERB CLINIC ® VITALITY FOR HIM ~ HERBAL BLEND TEA ~ APHRODISIAC

MSRP:
Now: $17.00 - $39.00
Was:
A tea for him full of masculine desire and vitality. With Invigorating ginger and spicy character with notes of liquorice. Ingredients: Cinnamon, fennel, mint, rosemary leaves, ginger root, St Johns...

MSRP:
Now: $16.00 - $34.00
Was:
Organic Rooibos Chai Tea Blend This delicious tea is an organic blend of caffeine free Rooibos combined with a sultry blend of Chai spices for your enhanced drinking pleasure.  Get ready to...

MSRP:
Now: $15.50 - $35.00
Was:
A Magical Herbal Blend of Hops, Lavender, Chamomile, Passionflower and Mullein. All of which can enhance your experience on their own but blended together they certainly do have the WOW factor...