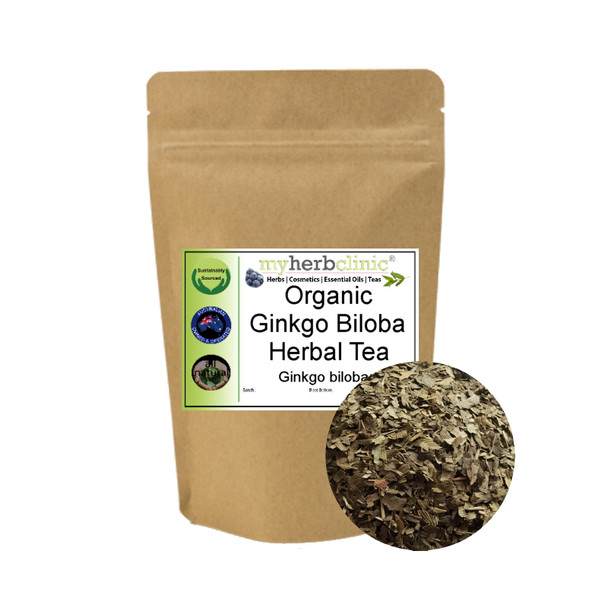 Ginkgo Biloba is the only member of the Ginkgoaceae family and is also known as the Maidenhair tree. It is popular in parks and lining streets in various parts of the world.

According to the book "The Healing Herbs" by Michael Castleman, Ginkgo is also the oldest surviving tree on earth.

Traditional Chinese Medicine practitioners and Indian Ayurvedic healers have long used the Ginkgo leaf for thousands of years. In more recent times, European or Western Herbalists have jumped on board as well.

Brewing Instructions: Can be brewed like a loose leaf tea. Boil water (90°C to 100°C degrees) and add between 1 teaspoon and 1 tablespoon of herbal blend per cup of water. Pour boiled water over the tea and allow to steep for at least 5 minutes before straining and serving.  Honey or vegan sweeteners can be used to sweeten and enhance the flavour

Herbal teas can often be rebrewed between sittings.

The above instructions are general guidelines only, and brew strengths and times can be adjusted to suit personal taste.

MSRP:
Now: $16.00 - $49.00
Was:
This lovely combination can be enjoyed either hot or cold. An enjoyable refreshing taste of Moringa and Lemongrass fusion. A caffeine free tea

MSRP:
Now: $16.00 - $49.00
Was:
Our moringa and chamomile fusion has a great impact on our well being, our positive moods, and the benefit of a wonderful nights sleep. Oh so delicious.

MSRP:
Now: $16.00 - $49.00
Was:
This lovely combination can be enjoyed either hot or cold. An enjoyable refreshing taste of Moringa and Lemongrass fusion. A caffeine free tea packed with nutrients from Moringa, and the cleansing...