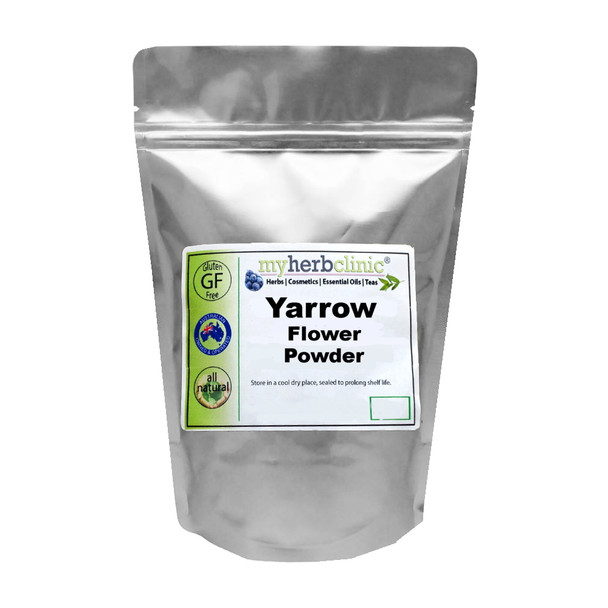 The legend of Yarrow is that it was the herb that protected the great Greek warrior Achilles and that he used to cover his body in a wash made of the herb, everywhere except for his heels and he used it to staunch the bleeding of his soldiers in battle.

Traditionally Yarrow has been used as a rinse or wash for wounds to clean and aid healing. It contains vitamins A, C, E and K and the minerals Manganese, Copper, Potassium, Iron and Iodine as well as Folic Acid. It has shown anti-oxidant and anti-bacterial properties as well as being used as an anti-spasmodic.

Historical uses were as a Heal-all, for melancholy, as a blood purifier, for kidney disorders, migraines, nose bleeds, toothaches, baldness, mouth and eye wash, healing agent for wounds of all kinds including ulcers.

Suggested preparation for Tea: boil 1 teaspoon per cup of water for 15 minutes, then after it has cooled slightly, serve.

Suggested preparation for a rinse or wash: Brew the tea as above and allow the mixture to cool before applying to skin.

*Some people will notice relief from allergy symptoms by drinking a tea of yarrow and mint.

MSRP:
Now: $16.00 - $33.00
Was:
A classic blend of botanical herbs, which have traditionally been used by herbalists to support the immune system. The delicate combination of elderflower, yarrow and peppermint, work synergistically...

MSRP:
Now: $15.00 - $29.00
Was:
Rosemary Botanical Name: Rosmarinus officinalisOrganic Status: ConventionalCountry of Origin: TurkeyForm: Leaf Rosemary is a herb that originated from the Mediterranean and has been...