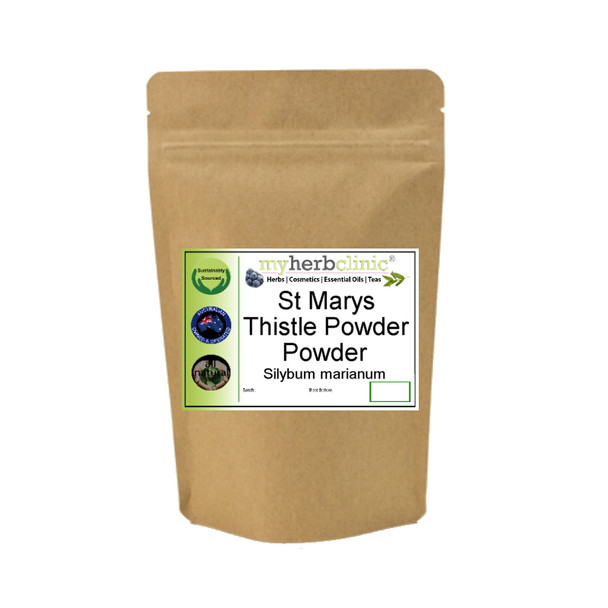 The seeds of St Mary's Thistle or Milk Thistle as it is also known, have been used in medicine for nearly 2000 years and preparations have been officially approved for use in Europe since around 1969. The German Commission E has approved its use for dyspepsia and to support liver damage (liver damage from toxins, inflammation or cirrhosis). Over the centuries it has been touted as a remedy for snakebite, melancholy, liver conditions and promoting lactation in women.

Current studies have shown that the belief that the herb has liver protective and regenerative properties is well founded and documented over multiple studies. Studies have also shown that Milk Thistle may improve digestion, particularly of fatty foods, and provide some protection against a number of drugs and environmental poisons.

Suggested preparation for Tea: 1 tablespoon of Milk Thistle seeds powder. Add 3 cups of water and bring to the boil. Steep for about 20 min before straining. Drink 1 cup 30 min before meals, up to 3 times per day. This is also well complemented by Peppermint (liver health), Calendula/Marigold (venous pain) and Dandelion (digestive complaints).

*St Mary's Thistle has demonstrated antioxidant and free radical scavenging activity in a variety of studies.

*Milk Thistle is originally from the Mediterranean and south Western Europe, although it is now found world wide and considered a weed.

*Many medicines are being used and trialed from extracts of the bio-available agents found in the seeds.

MSRP:
Now: $16.00 - $30.00
Was:
Wildcrafted Dandelion Root Powder Botanical Name: Taraxacum officinalisOrganic Status: WildcraftedCountry of Origin: GermanyPlant Part: Root Dandelion may be just a pesky weed to some, but it...